Welcome to All ID Myanmar Contact Us About Us

Your One Stop ID Solutions Provider

Profile
Sierra Marine, with headquarters outside of Chicago in Litchfield, Illinois,has been the leading manufacturer and supplier of marine engine and drive parts for more than 35 years. The company is a manufacturing division of publicly traded Teleflex Marine, and distributes more than 6,000 products to stores worldwide. Recently, the company s rapid expansion of its warehouse created difficulties for its employees. As the floor space grew, employees could no longer manage inventory in real-time due to the short wireless range of their old handheld scanners. As a result, data had to be manually  uploaded to a database when the scanners returned within range of the server. The problem was exacerbated by the age of Sierra Marine s handheld equipment, which began to fail on a regular basis.

This created an opportunity to re-evaluate Sierra Marine s inventory management system in order to improve the company s bottom line. Reseller eComputer, Inc. was tasked with finding the right solution, and it chose CipherLab s 1166 wireless BT scanners.  After conducting extensive research for Sierra Marine, I was impressed by the CipherLab 1166 s reliability,features and specs when compared to Intermec and Metrologic handhelds, said J n P. Badie, senior sales manager at eComputer Inc.  The most notable differentiators were the scanner s ability to upload data within hundreds of feet of a wireless terminal and its large memory in batch mode   enabling work to get done more accurately and in less time.

Deployment
Global distributor BlueStar, Inc. helped integrate the joint CipherLab-Instamation solution in a matter. With the CipherLab 1166 s open-source architecture, eComputer and CipherLab distributor Blue-Star, Inc. were able to install and integrate the scanners in a matter of days at Sierra Marine. Now, paired with in-house software, the CipherLab 1166 lets employees manage inventory effortlessly — and instantaneously. Real-time inventory management helps eliminate manual errors and minimize over- or under-stocking, creating a more efficient work staff. The large batch mode memory of the CipherLab 1166 also enables employees to capture product information at the far reaches of the warehouse and upload it automatically when back in wireless range. 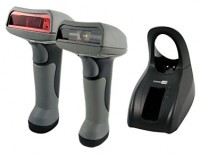 Freedom to the workers!  lets them do more for your customers, your business. Built with a safe, linear imaging reader, the 1166 BT scanner connects anywhere within 100 meters (328 ft.) to go where the work and customers are.

Even out of range, it acquires data, uploading it when back in coverage. And the 1166 makes your investment work for you by sharing its communication cradle with up to seven CipherLab BT scanners. Efficiency and value are built right into the 1166 Wireless BT Scanner.